On the Road with A.J. – The Finale

I was pumped. I had helped load, unload, load again and now, 2,500 miles later, it was time to deliver our new favorite customer’s household goods to her new home. I felt like I had been through a mini apprenticeship and learned a lot in a very short period of time. And Bob was going to let me do a lot more now that I’d paid some dues.

“We’re a few minutes early, why don’t you go get us some coffee,” said Bob as we pulled up on the side of the road just before turning into Mrs. Bennett’s neighborhood. “There’s a 7-Eleven right up the road.”

That wasn’t exactly what I had in mind, but hey, the new guy has to take care of the important stuff. By the time I got back, we were ready to roll. An excited Mrs. Bennett waved to us from her garage as we pulled up.

“I’m so glad to see you guys,” she said. It had been a long trip for her too. She and her son made the drive just a day or so before and it was clear they were pretty tired too.

We got right to work and I was assigned to floor protection duty, putting down furniture blankets then Masonite in a strategically arranged path to roll dollies throughout the house without causing damage.

I unwrapped furniture, put together tables, lamps and whatever came my way. Speaking of lamps, I got in a fight with one of those three-part torch lamps with the wire running inside the entire length from the base to the housing of the little light bulbs that get to be 400 degrees when lit. In the end, I won, but only after I scratched the heck out of the middle tube after it became incredibly uncooperative and lopsided as I was trying to screw it together.

“Mrs. Bennett, I’m afraid I’ve scratched up your lamp. I want you to take a look at it let me know what you think. Once you do, if you’re concerned, I’ll be happy to simply replace the lamp and we’ll just take care of it before I leave,” I said smugly.

“Oh, don’t worry about it,” she said. “I’ve had that thing forever. It’s not expensive at all. No worries.” 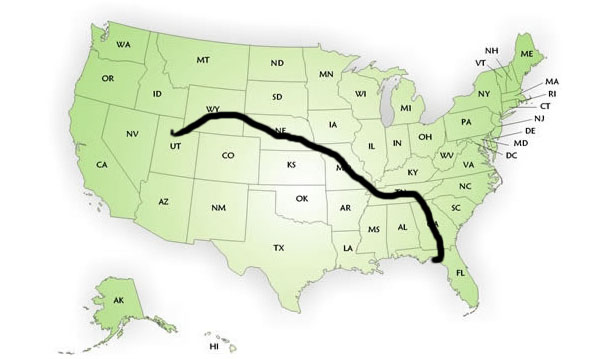 As I’ve already noted, Tampa was hot and humid and by 2 p.m. (just as Bob had predicted) we were finishing up the delivery and I started pulling up the floor protection, folding up furniture blankets and collecting garbage – tons of tape, cardboard bits from torn cartons and empty water bottles. We had one job left – an extra stop to Mrs. Bennett’s son’s home to deliver a heavy gun safe. It was a short drive and the AAA Moving & Storage helpers made short work of it – just as the afternoon rain started to fall.

As we headed back to AAA to pick up my stuff and for Bob to get on the road to Georgia to deliver his next customer, I was a bit sad that the whole adventure was coming to a close. I said my goodbye’s (after another Italian sausage from Victor’s food truck across the street) and Bob took off in his truck honking the horn all the way out into the street.

Marty Shulz from AAA was kind enough to take me to the airport, about a half hour away. As we neared the turnoff, I got a frantic call from Bob who was well on his way down the road. Turns out, something was wrong with Mrs. Bennett’s bed and she wanted Bob to turn around, or someone to come fix it.

Marty and I went into action. We exited the highway and drove back to Mrs. Bennett’s house. Someone else would have to get the coffee this time – now I was in-charge.

Mrs. Bennett showed us the bed. “I don’t ever remember seeing that board before,” she said pointing to what looked like a very complicated set of drawers attached to the foot of the bed.

Marty and I must have stared at that thing for 15 minutes before either one of us had a good idea. In the end, I owe Marty a debt of gratitude because he finally figured it out. I was clueless and I’m sure I went pale when I realized that there was the distinct possibility that we would never get it put back together.

After borrowing Mrs. Bennett’s only screwdriver (thank goodness the screws were Phillips and so was the screwdriver), we re-assembled the bed and drawers and Mrs. Bennett gave us her sign off. We said goodbye (again) and headed to the airport. My adventure was complete.

If you’ll indulge me in a few final comments:  I’d like to thank Bob and Lori Krumpols and their staff for setting up this opportunity – these folks are at the top of their game and consummate professionals in their craft. I couldn’t have asked for a better guide to provide me with insight into the INCREDIBLY hard work our Wheaton and Bekins drivers, agents, packers loaders and helpers do every day.

I am humbled by the complexity, experience, physicality, mental fortitude, tenacity and perseverance of these folks and their ability to wake up the next day and do it again, creating another satisfied and loyal customer. On more than one occasion, a loader, helper or Bob himself said, “it’s not rocket science.”

No. But few things besides rocket science are. It is, however, Relocation Science, and anything less than that acknowledgement sells this profession far short of its true value.

I’m proud to work with the Wheaton | Bekins network and all of you.

Enjoy some photos and videos of A.J.’s trip below:

Moving household goods between a truck and a shuttle

On the Road with A.J. is a blog series written by Executive Vice President of Wheaton World Wide Moving, A.J. Schneider as he travels across the country with truck driver Bob Krumpols of Preferred Movers of Nashville, Tenn. He will be experiencing life on the road while assisting with everyday interstate moves.  Follow A.J.’s journey on the Wheaton World Wide Moving blog, Facebook page and Twitter page.